So we see again in the press that too many hospitals in England are falling short in the most basic care they are giving elderly patients. The Care Quality Commission carried out unannounced visits at 100 hospitals to assess dignity and nutrition standards and identified concerns in 55 cases, describing the findings as “alarming”. 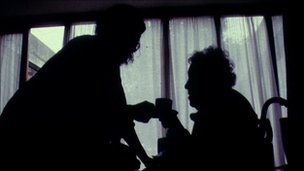 A few months ago I saw an article on sky news about a specific instance of poor care and it struck a chord with me when my mother died in a hospital in a NHS Trust Newport Hospital a few years back. Apparently in the case sky highlighted officials from the South London Trust have apologised to the family of Derek Sauter, who later died in hospital of pneumonia (no doubt lessons have been learned!!). The 60-year-old patient did not receive a “proper and professional standard of care” when he was admitted with a chest infection in June 2008. A formal investigation was conducted into his death, after it was found his oxygen levels went unchecked for 11 hours and were 35% lower than recommended.

Ruth Sauter, the patient’s daughter, said she was disgusted by the treatment her father had received. She told The Daily Mail: “His condition was not life threatening, and nurses had specific instructions to keep close tabs on him. “‘But their appalling lack of care, and cruel behaviour killed my father…It’s so much worse knowing that he died alone, thirsty and scared on that ward.”

Well this sort of treatment is not that uncommon four years ago I was in the same situation. I turned up at the Hospital to find my mother had been placed in a geriatric ward (she actually had a blood disease and should have been in haematology) with four other old ladies left in their soiled bedclothes in a rather drafty backwater of the hospital. There was poo on the floor and the wash basin stank through lack of a disinfectant. When one of the other patients started screaming a hassled nurse came out of their rest room where they were watching TV to shout at this patient to ‘f***ing’ well shut up. No shame there were dozens of visitors present in the neighbourhood. Tea came around and boiling hot tea was tipped into a mug and handed to my mum who could not hold the cup as her hands were very bad by then. Fortunately I was there that time to hold the cup but she told me that many a time she was thirsty and could not get help from the ‘feckless idle bunch that passed for care staff on that ward’.